Today I have a new specialty for you, a christmas treat.

Created for the festive season,

I present you a Spéciale Belge Ale. Dobbel Palm is an amber-coloured beer with a pronounced malty and hoppy character. It also has caramel flavours with a honey-like mellowness.

Dobbel Palm was created in 1947 because Palm Breweries existed 200 years. And this beer is the annual end of the year gift to us! Of course you have to drink it in the typical glass.

It fits perfectly with some grilled food. This beer is ideal for a gift at the end of the year!

In my last post, I have told you about Arthur’s Legacy. Palm Craft Brewers presents a series of small craft beers (made in the microbrewery ‘De Hoorn’) in a very low quantity. 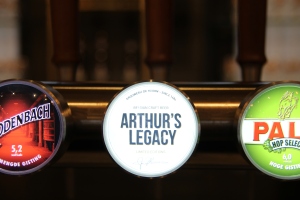 Today I’m introducing you the first one: ‘White widow’. You can now drink it at the Bruges Beer Museum. They only brewed 600 liters, so you will have to be really really fast to taste a glass. It has a soft bitterness but at the same time it is also very fruity and spicy. They have added the hop sort ‘Comet’. It tastes like lemon, coriander and lemon grass. The beer hasn’t been filtered, so it is quite murky. It has a 7,1 % alcohol level :-).

It hasn’t been bottled, so sadly I cannot ship it to you guys! But I still wanted to let you know, because it tastes sooooo f***** good!

Cornet is a top-fermented beer produced by a brewery called De Hoorn. 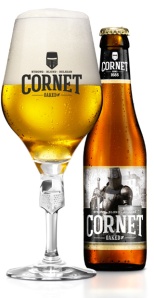 De Hoorn was a small brewery at Steenhuffel that has disappeared over time. But Palm Craft Brewers decided to rebuild the brewery in order to brew small craft beers in a very low quantity (they will be called ‘Arthur’s legacy’). The first beer by ‘De Hoorn’ is already a straight hit: Cornet.

And today I’m introducing it to you. It’s now available to order on my webshop.

This exclusive beer is a blond Belgian beer with a subtle wood, vanilla and bitter flavor. It has a 8,5 % alcohol level.

Tip: if you like Duvel, don’t hesitate to order this one, you will love it.

You should definitely try it!

Do you also love the christmas market in Bruges?? This friday the ice track, the little shops & bars officially opened. It’s very cosy (but a little bit cold). But of course there is a very obvious solution for that.. Yes, I can see you thinking.. Alcohol!

The most popular drink in the winter time and on the christmas market is genever – jenever – genièvre. Did you already know that genever can only be produced in Belgium or in the Netherlands? Otherwise it cannot even be called genever.

Genever was produced by distilling malt wine. But actually it tasted really awful, so they added the juniper berry, to make it drinkable. The juniper berry was known for its medicinal effects. So genever is actually a medicine! 😀

It’s now also available on my webshop Taste Belgium. Click on the link to see what flavors are available!

Cheers and bottoms up… 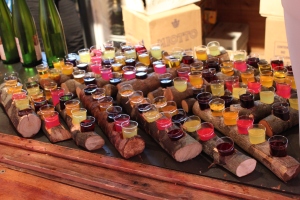 Last night I drank a surprisingly nice stout beer… I could fully recommend it to anyone who can get their hands on it!

As you maybe know or not know, Struise has another beer called Black Albert. The Black Albert is a tribute to Albert II, our sixth king (Belgium). So the Cuvée Delphine is based on the Black Albert, but matured on Four Roses bourbon barrels for 12 months.

Also nice to know is that Delphine Boël has created the artwork for its label. The label speaks for itself!

And it has the amazing alcohol level of 11%…

I will definitely drink this again!

By the way, I drank this in a bar called ‘Le Trappiste‘ in Bruges, Belgium. I can highly recommend it if you adore beer. As you can see on the picture, there is a wide choice of top beers!

WARNING: this is one of the best ‘new’ beers I have tried this year! 🙂

I admit, the label is not very attractive, but it’s definitely yummy. It’s a blonde triple brewed with only pilsner malt and three types of hops. A perfect balance between bitter, sweet & fruity.

As you all know the Bruges Beer Festival took place in the beginning of this year. There the beer was chosen (by the visitors) as the best beer! So that means quite a lot!

Would you buy it, if I put it online on my webshop?

Yes! We are famous for our beer, waffles and French fries… But another total classic is our Belgian stew. You can prepare it in many different ways (ask any Belgian grandmother …. ;-)) So today, I’m sharing one recipe to make it. It was my first time and it went really well! Only I had a bit of bad luck with the meat… sometimes it’s hard to get it soft.

But you have to take your time. You have to have a lot of patience, but your patience will be rewarded, believe me!

Heat the oil (small pieces) and put your onions in a big stew-pan on a low fire. Meanwhile, take another pan and put some oil and butter in it. Put it on a high fire. It has to be really hot before you put your meat in it. Then, bake your meat until it has a nice and crusty brown layer (it has to happen fast).
After that, put the flower on your onions and poor your beer on it. When that is done, you can add your meat. Also add some (25 cl) water, your herbs and bouillon.
Now you have to play the waiting came!!
You should at least let it on a really low fire for an hour and a half.
Then, you can add your brown spiced biscuits (crumb!) And of course some pepper and salt.

Good luck! And let me know if you have questions…

You will never believe this! Soon we will have an underground beer pipe line in Bruges. Brewery ‘De Halve Maan’ wanted to connect their two production sites. And they were very innovative 🙂

It is a world premier! The brewery already made some big investments so they could keep on brewing in the historical centre.
They needed to transport the beer with tank trucks to their other ‘factory’. Meaning +- 10 trucks a day.

De Halve Maan is known for their Brugse Zot. And every Brugse Zot is produced in our little town. Anyway it’s certainly better for the environment.

The pipe will be 3 km long. I need to move there and build a little tap!!

Today’s blog is about hops! It is so popular lately…

It’s the female flower of the hop plant (see image above). And it gives a rather bitter, grassy, floral, spicy, lemony,… taste to your beer.

It all comes down to acids that the hop resins contain: alpha & beta acids. In a nutshell, the alpha acids favor the fermentation of the beer. So they are responsible for the flavor of the beer. The beta acids do not contribute to the taste, but to the aroma of the beer. So that is why, there are two kinds of hops: the bittering ones and the aroma hops.

And guess which country is flooded with hops? 🙂

No, it’s not Belgium.

Quick message to let you know that I’m working on a new background for the beer bottles. I like this background a lot! I have no photoshop experience, but tried some tutorials to make my logo look ‘burned’ into the wood. I like! But it has to be smaller of course. What do you think?